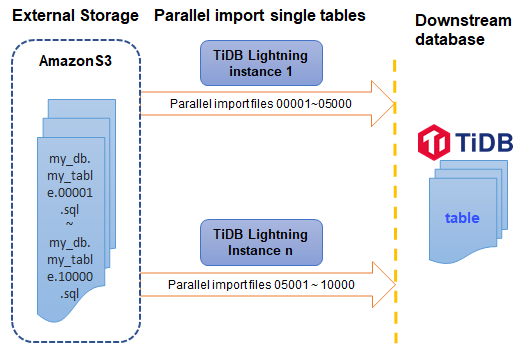 Because TiDB Lightning needs to upload the generated Key-Value data to the TiKV node where each copy of the corresponding Region is located, the import speed is limited by the size of the target cluster. It is recommended to ensure that the number of TiKV instances in the target TiDB cluster and the number of TiDB Lightning instances are greater than n:1 (n is the number of copies of the Region). At the same time, the following requirements should be met to achieve optimal import performance:

TiDB Lightning exclusively uses some resources when it is running. If you need to deploy multiple TiDB Lightning instances on a single machine (which is not recommended for production environments), or on a disk shared by multiple machines, be aware of the following usage restrictions.

If the data source is stored in external storage such as Amazon S3 or GCS, see External Storages.

In the local environment, you can use the --filesize or --where parameter of Dumpling to divide the data of a single table into different parts and export it to the local disks of multiple servers in advance. This way, you can still perform parallel import. The configuration is the same as Example 1.

If one or more TiDB Lightning nodes exit abnormally during a parallel import, identify the cause based on the logged error, and handle the error according to the error type:

During an import, an error "Target table is calculating checksum. Please wait until the checksum is finished and try again" is reported

Some parallel imports involve a large number of tables or tables with a small volume of data. In this case, it is possible that before one or more tasks start processing a table, other tasks of this table have finished and data checksum is in progress. At this time, an error Target table is calculating checksum. Please wait until the checksum is finished and try again is reported. In this case, you can wait for the completion of checksum and then restart the failed tasks. The error disappears and data accuracy is not affected.