As a NewSQL database, TiDB excels in the best features of the traditional relational database and the scalability of the NoSQL database and is of course, highly available across data centers (hereinafter referred to as DC). This document is to introduce different deployment solutions in cross-DC environment.

TiDB, TiKV and PD are distributed among 3 DCs, which is the most common deployment solution with the highest availability. 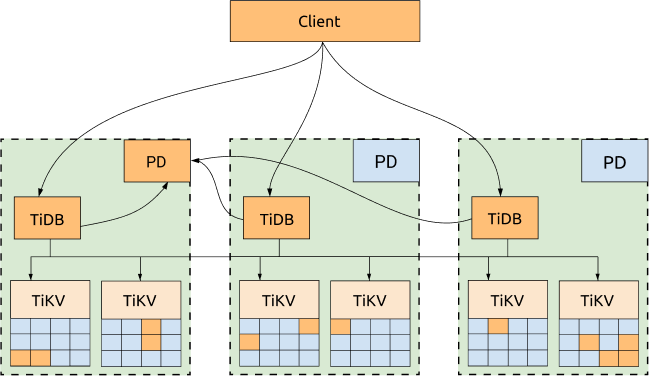 All the replicas are distributed among 3 DCs. Even if one DC is down, the other 2 DCs will initiate leader election and resume service within a reasonable amount of time (within 20s in most cases) and no data is lost. See the following diagram for more information: 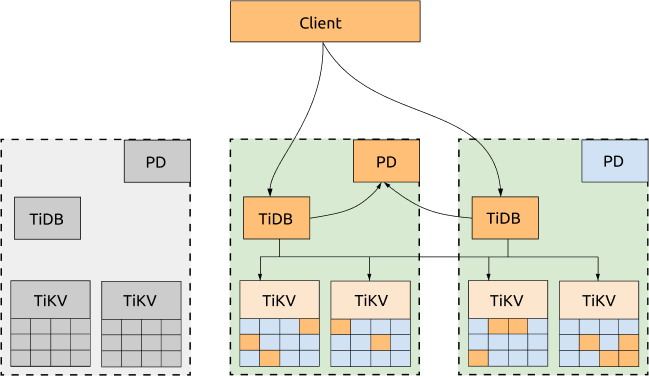 The performance is greatly limited by the network latency.

If not all of the three DCs need to provide service to the applications, you can dispatch all the requests to one DC and configure the scheduling policy to migrate all the TiKV Region leader and PD leader to the same DC, as what we have done in the following test. In this way, neither obtaining TSO or reading TiKV Regions will be impacted by the network latency between DCs. If this DC is down, the PD leader and Region leader will be automatically elected in other surviving DCs, and you just need to switch the requests to the DC that are still online. 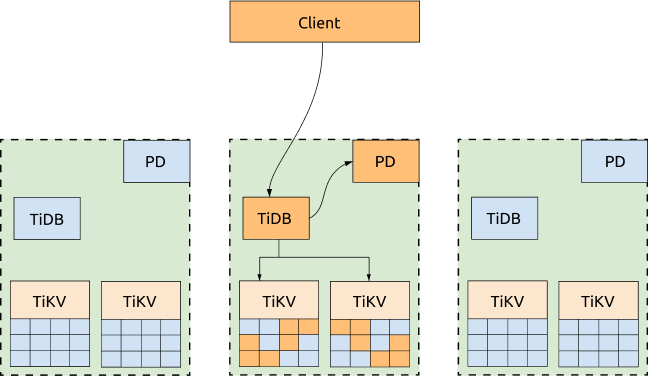 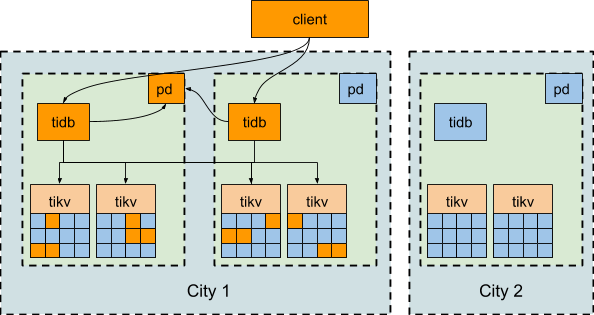 Compared with the 3-DC deployment, the 3-DC in 2 cities deployment has the following advantages:

However, the disadvantage is that if the 2 DCs within the same city goes down, whose probability is higher than that of the outage of 2 DCs in 2 cities, the TiDB cluster will not be available and some of the data will be lost. 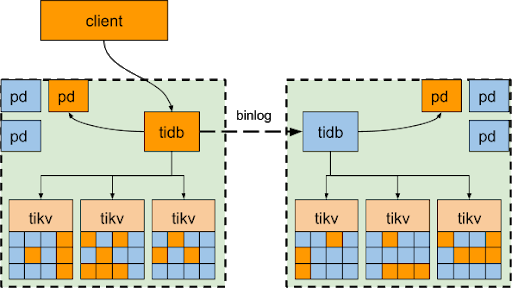 If the primary DC goes down, the requests can be switched to the secondary cluster. Similar to MySQL, some data might be lost. But different from MySQL, this solution can ensure the high availability within the same DC: if some nodes within the DC are down, the online workloads won’t be impacted and no manual efforts are needed because the cluster will automatically re-elect leaders to provide services. 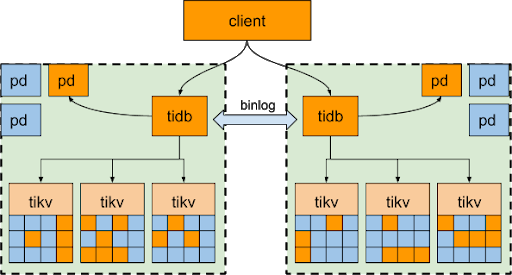 Some of our production users also adopt the 2-DC multi-active solution, which means:

Please be noted that for the 2-DC + Binlog replication solution, data is asynchronously replicated via Binlog. If the network latency between 2 DCs is too high, the data in the secondary cluster will fall much behind of the primary cluster. If the primary cluster goes down, some data will be lost and it cannot be guaranteed the lost data is within 5 minutes.

Overall analysis for HA and DR

For the 3-DC deployment solution and 3-DC in 2 cities solution, we can guarantee that the cluster will automatically recover, no human interference is needed and that the data is strongly consistent even if any one of the 3 DCs goes down. All the scheduling policies are to tune the performance, but availability is the top 1 priority instead of performance in case of an outage.

For 2-DC + Binlog replication solution, we can guarantee that the cluster will automatically recover, no human interference is needed and that the data is strongly consistent even if any some of the nodes within the primary cluster go down. When the entire primary cluster goes down, manual efforts will be needed to switch to the secondary and some data will be lost. The amount of the lost data depends on the network latency and is decided by the network condition.