This document describes a tuning approach by database time, and illustrates how to use the TiDB Performance Overview dashboard for performance analysis and tuning.

Performance tuning based on database time

TiDB is constantly measuring and collecting SQL processing paths and database time. Therefore, it is easy to identify database performance bottlenecks in TiDB. Based on database time metrics, you can achieve the following two goals even without data on user response time:

Is TiDB the bottleneck?

If the bottleneck is in TiDB, how to identify it?

The following figure shows a typical SQL process. You can see that most SQL processing paths are covered in TiDB performance metrics. The database time is broken down into different dimensions, which are colored accordingly. You can quickly understand the workload characteristics and catch the bottlenecks inside the database if any.

Database time is the sum of all SQL processing time. A breakdown of the database time into the following three dimensions helps you quickly identify bottlenecks in TiDB:

This section describes how to perform performance analysis and tuning based on database time using the Performance Overview dashboard in Grafana.

The database time metric is the sum of the latency that TiDB processes SQL per second, which is also the total time that TiDB concurrently processes application SQL requests per second (equal to the number of active connections).

The diagrams of database time breakdown and execution time overview present both expected and unexpected time consumption intuitively. Therefore, you can quickly identify performance bottleneck and learn the workload profile. Green and blue areas stand for normal time consumption and requests. If non-green or non-blue areas occupy a significant proportion in these two diagrams, the database time distribution is inappropriate.

In example 3, SELECT statements need to read thousands of rows concurrently from multiple TiKVs. Therefore, the total time of the BatchGet request is much longer than the execution time.

The TPC-C workload are mainly UPDATE, SELECT, and INSERT statements. The total QPS is equal to the number of StmtExecute commands per second and the latter is almost equal to avg-hit on the Queries Using Plan Cache OPS panel. Ideally, the client caches the object of the prepared statement. In this way, the cached statement is called directly when a SQL statement is executed. All SQL executions hit the prepared plan cache, and there is no need to recompile to generate execution plans.

In this workload, Commit QPS = Rollback QPS = Select QPS. The application has enabled auto-commit concurrency, and rollback is performed every time a connection is fetched from the connection pool. As a result, these three statements are executed the same number of times.

Starting from TiDB v6.0.0, you can prevent the StmtClose command from clearing cached execution plans via the global variable (set global tidb_ignore_prepared_cache_close_stmt=on;). In this way, subsequent executions can hit the prepared plan cache.

The number of StmtPrepare commands per second is much greater than that of StmtClose per second, which indicates that the application has an object leak for prepared statements.

In this workload, only ANALYZE statements are running in the cluster:

In this workload, each TiDB and TiKV is configured with 8 CPUs.

Obviously, TiDB consumes more CPU, which is near the bottleneck threshold of 8 CPUs. It is recommended that you scale out the TiDB.

In the TPC-C workload below, each TiDB and TiKV is configured with 16 CPUs.

Obviously, TiKV consumes more CPU, which is expected because TPC-C is a write-heavy scenario. It is recommended that you scale out the TiKV to improve performance.

An applications perform transactions with the same database connction. By comparing the average query latency with the connection idle duration, you can determine if TiDB is the bottleneck for overall system, or if user response time jitter is caused by TiDB.

In real customer scenarios, it is not rare that the bottleneck is outside the database, for example:

Example 1: The number of disconnection/s is too high

Example 2: TiDB is the bottleneck of user response time

The average query latency is significantly greater than avg-in-txn, which means the main bottleneck in transactions is inside the database.

Example 3: TiDB is not the bottleneck of user response time

In this workload, the average query latency is 1.69 ms and avg-in-txn is 18 ms, indicating that TiDB spends 1.69 ms on average to process a SQL statement in transactions, and then needs to wait for 18 ms to receive the next statement.

The average query latency is significantly lower than avg-in-txn. The bottleneck of user response time is not in TiDB. This example is in a public cloud environment, where high network latency between the application and the database results in extremely high connection idle time, because the application and the database are not in the same region.

In TiDB, there is a typical processing flow from sending query statements to returning results.

If an application uses the query or StmtExecute MySQL command interface only, you can use the following formula to identify the bottleneck in average latency.

Usually, the execute phase accounts for the most of the query latency. However, the parse and compile phases can also take a large part in the following cases:

In the preceding figure, the average time of the parse, compile, and execute phases are 17.1 us, 729 us, and 681 us, respectively. The compile latency is high because the application uses the query command interface and cannot use prepared plan cache.

In this TPC-C workload, the average time of parse, compile and execute phases are 7.39 us, 38.1 us, and 12.8 ms, respectively. The execute phase is the bottleneck of the query latency.

TiDB interacts with PD and TiKV in the execute phase. As shown in the following figure, when processing SQL request, TiDB requests TSOs before entering the parse and compile phases. The PD Client does not block the caller, but returns a TSFuture and asynchronously sends and receives the TSO requests in the background. Once the PD client finishes handling the TSO requests, it returns TSFuture. The holder of the TSFuture needs to call the Wait method to get the final TSOs. After TiDB finishes the parse and compile phases, it enters the execute phase, where two situations might occur:

The indicators in this section correspond to the following three panels.

The relationship between Avg TiDB KV Request Duration and Avg TiKV GRPC Duration is as follows:

The difference between Avg TiDB KV Request Duration and Avg TiKV GRPC Duration is closely related to the network traffic, network latency, and resource usage by TiDB and TiKV.

In this workload, the average Prewrite latency on TiDB is 925 us, and the average kv_prewrite processing latency inside TiKV is 720 us. The difference is about 200 us, which is normal in the same data center. The average TSO wait latency is 206 us, and the RPC time is 144 us.

In this example, TiDB clusters are deployed in different data centers in the same region. The average commit latency on TiDB is 12.7 ms, and the average kv_commit processing latency inside TiKV is 10.2 ms, a difference of about 2.5 ms. The average TSO wait latency is 3.12 ms, and the RPC time is 693 us.

In this example, the TiDB clusters are deployed in different data centers in the same region, and TiDB network and CPU resources are severely overloaded. The average BatchGet latency on TiDB is 38.6 ms, and the average kv_batch_get processing latency inside TiKV is 6.15 ms. The difference is more than 32 ms, which is much higher than the normal value. The average TSO wait latency is 9.45 ms and the RPC time is 14.3 ms.

TiKV processes a write request in the following procedure: 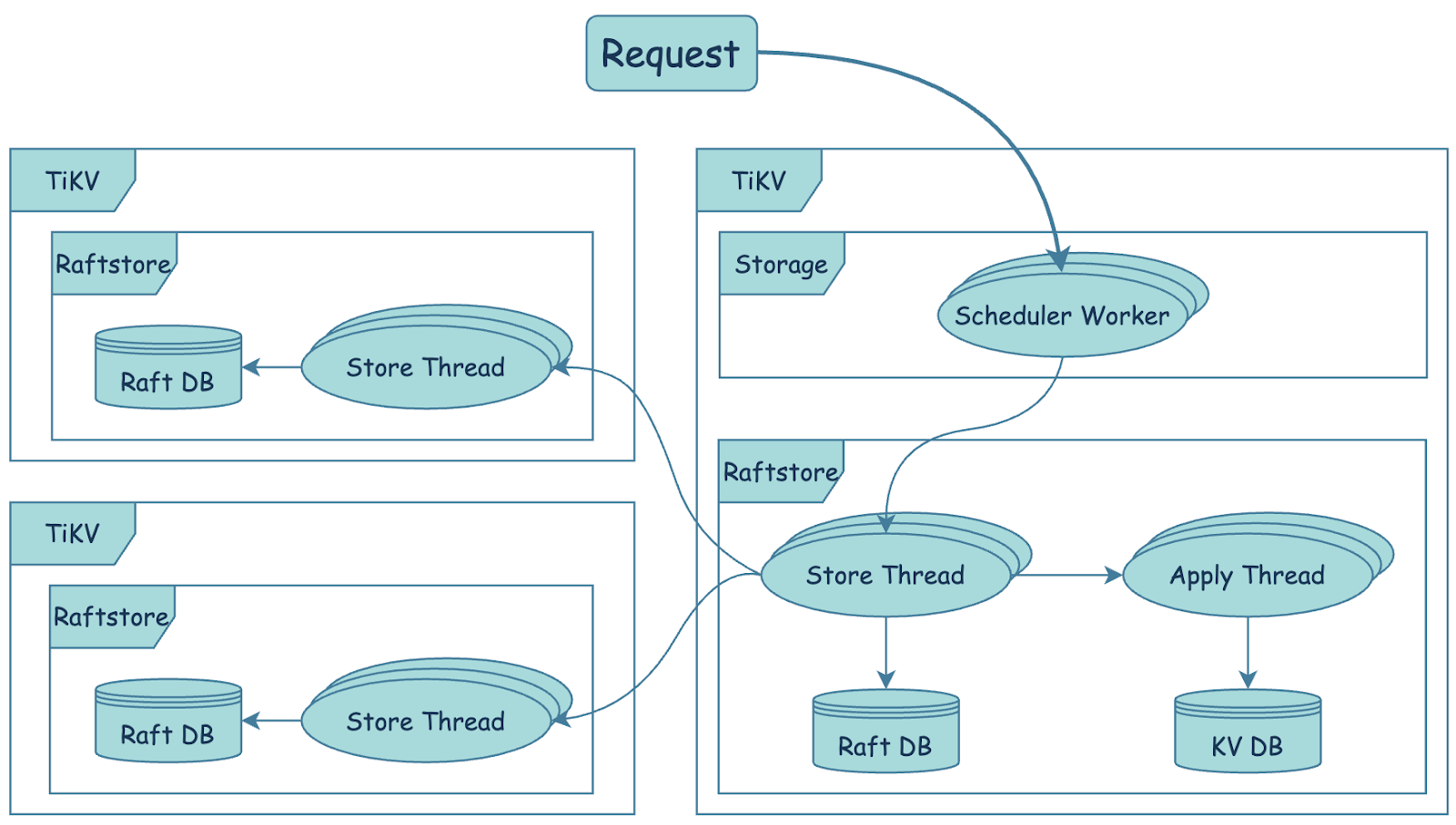 The Storage Async Write Duration metric records the latency after a write request enters raftstore. The data is collected on a basis of per request.

The Storage Async Write Duration metric contains two parts, Store Duration and Apply Duration. You can use the following formula to determine whether the bottleneck for write requests is in the Store or Apply step.

Store Duration and Apply Duration are supported since v5.3.0.

In v5.4.0, the gPRC module has been optimized to accelerate Raft log replication, which reduces Store Duration compared with v5.3.0.

Example 2: Store Duration is a bottleneck

Apply the preceding formula: 10.1 ms ~= 9.81 ms + 0.304 ms. The result indicates that the latency bottleneck for write requests is in Store Duration.

The QPS of a write-heavy OLTP workload in v5.4.0 is improved by 14% compared with that in v5.3.0. The following table compares the three key latencies.

In v5.4.0, the gPRC module has been optimized to accelerate Raft log replication, which reduces Commit Log Duration and Store Duration compared with v5.3.0.

If my TiDB version is earlier than v6.1.0, what should I do to use the Performance Overview dashboard?

Starting from v6.1.0, Grafana has a built-in Performance Overview dashboard by default. This dashboard is compatible with TiDB v4.x and v5.x versions. If your TiDB is earlier than v6.1.0, you need to manually import performance_overview.json, as shown in the following figure: 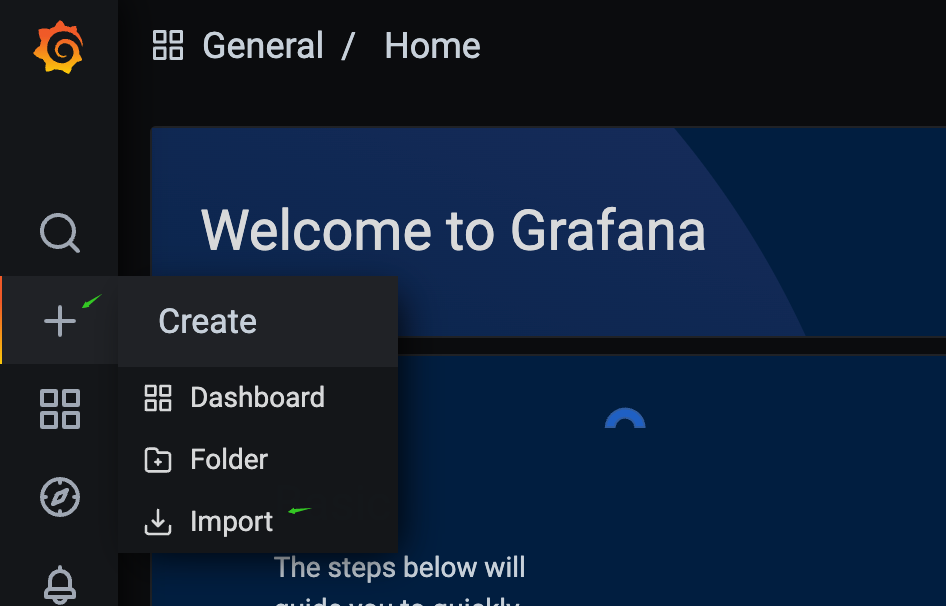